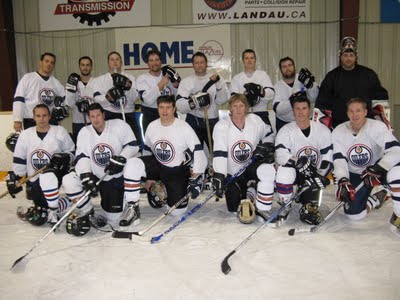 On a night that saw the Lube kings play arguably their best hockey of the season, the home side would not be denied. Leading with a 3 point performance of his own, Shawn decided to halt the team’s current 2 game winning streak.

The rest of the team responded with many notable moments of their own – Leduchowski forcing the Haze’s goalie to cough up the puck leading to a goal in the second perod, Baetsen mucking it out in the corners, Mich making huge momentum saving saves, and more importantly the team’s ability to sustain pressure deep in the Haze’s own end throughout the game.

The team unveiled their new team colours (for the second time) as well on this night. The new jerseys’ advanced aerodynamic properties were evident in the first period when Shawn easily outskated the Haze’s defencement in a race down the ice which he managed to put past their keeper to set the early tone. Merchandise sales are sure to swell in the new year.

Also of note was Lube King Alumni Serg Almeida’s return to the ice after a lengthy absence. After enduring a barrage of verbal assaults in the dressing room prior to the game, Serg was basically useless on the ice with the exception of a heated verbal exchange with the haze and the ref late in the third period. Like I said, we’ve really missed him!

We’ve also got a team building night before the game at Big Guy’s on Meadowood starting at 19:00. It would be great to have everyone come out.

As usual, let me know if you can’t make the game.