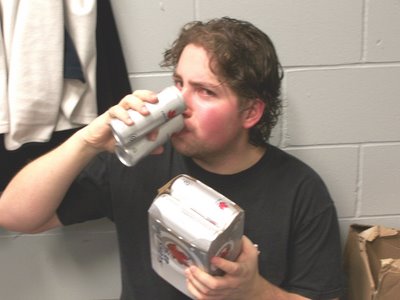 By the time Mikey came off the ice on Saturday night the balloons were hanging in the dressing room to celebrate his coming out. Of course we’re talking about his scoring drought – no one would dare question this team player’s manhood.

“Well, I felt that the guys needed some inspiration out there tonight.” Those were the words from a content Fagundes in the room after the contest. His first came in true mucker’s form when he batted a rebound into a yawning cage early in the second. His nicest goal of the year then came minutes later when he picked up the puck at the Lube King’s blue line, deeked out several players en route to setting up a screened howitzer from the top of the circle to send the bench into a frenzy.

Unfortunately the Lube Kings ran out of time as the buzzer confirmed a 5-4 loss to the Desperados. 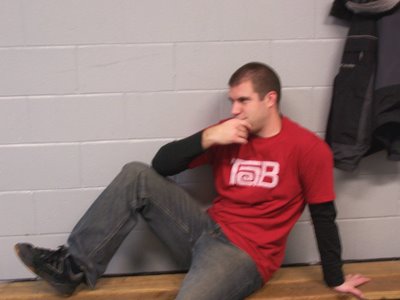 Despite calling up young gun Marcoux, the Lube Kings were unable to overcome an early 3-0 deficit en route to a 4-1 loss to the vaunted General Electric squad. The loss drops the team’s season series to 0-3 with one game remaining in mid February. It will definitly be an all hands on deck call for the Lube Kings to avoid the season sweep.

ONE TIMERS
*Congratulations to Rob on his recent wedding, reports indicate she said yes at crunch time.
*Congratulations also to Darren who’s hitting the streets this week riding the big red trucks. 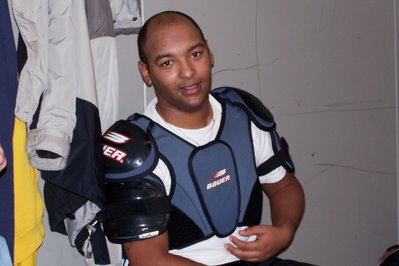 After falling behind 2-0 to team Enterprise early in the first period, JJ decided to take matters into his own hands and valiantly attempted to steer the home side to victory.

At least we didn’t lose.

Having obviously studied Samy Sosa, JJ thought he would try bunting/cross-checking a chest high cross pass to spur some offense from his side. It counted.

That says it all. Old Time Hockey pulled an old time no-show. Tired of just yelling at his teammates about the back check, Goalie Mich thought he’d show them what he wanted to see out there. Thanks to Goalie Ray tending the net last night, Mich strapped on the normal looking skates for the first time in his pro career. In the process he also set an unofficial team record as the first “goalie” to score a goal and an assist in a single game. Nicely done. Might there be a position change in the future?

The hardest working player award went to Mike last night who did everything for his team except actually score. He skated his rear end off, deflected pucks in front of the net, drew a penalty on High Voltage and even laid the body when it was called for. All of this despite being stricken with the a cold, the squirts, ringworm and other unmentionable and undiagnosed ailments. Nicely done Mike.

Also of note is Russ who also now is the holder of the team record for playing on the shittiest pair of skates in franchise history after his blades were absolutely massacred by the white sharpening machine from hell. “I’ve never seen anything like it. Those blades remind me of a Sh** I once took!” an unimpressed Rusty was heard saying in the locker room before the puck dropped.
In all seriousness, the fact he was able to play on those was really impressive. A lesser man would have hung ’em up. Nice work.

It would appear the Lube Kings are now firing on all cylinders with everyone contributing to a solid effort. Call up Goalie Ray made numerous highlight quality saves last night backstopping his squad to the 9-5 victory. The win now elevates the King’s record to 6-5-2. 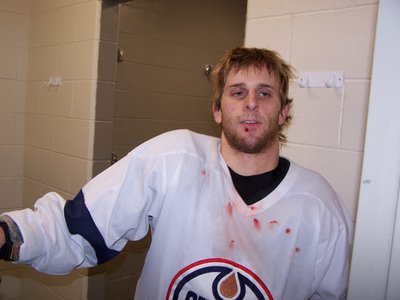 At times it looked like a scene from the St-Pierre VS Matt Hughes matchup in the octagon. The fists were flying and the blood was flowing during the first meeting of the season between the Lube Kings and Enterprise.

The contest started off slowly for the Lube Kings last night who, by the end of the first period, were trailing by a score of 4-0. Darren Fedyck then took a hooking penalty early in the second which seemed to mark a change in team strategy. He was later quoted as saying: “The bench needed a spark, and I thought I was the guy to provide it. I think it wound up winning the game for us.” Well, something definitely changed on the bench, because the team wound up with 16 minutes in penalties (team record) but drew Enterprise into significantly more.

At one point late in the third period leading 8-6, Joe Marcoux was trying to clear the puck down the far boards when a poor skating forward, trying to draw a penalty, flayed his arms and stick in the air and struck Joe in the face with it. The medical staff was called in and Joe required several stitches to mend the gaping hole on the outside of his lip left by a protruding tooth.

In the end, the surging Lube Kings proved to be too much for team Enterprise, and after the home team withstood a late game surge by the opposition, Dave Robin netted the insurance marker with mere seconds to go, ensuring victory on this night.

Those who braved the late hour were treated to a record setting performance by one Joe Marcoux last night at the Glenwood arena. Young Joe was a late call up last night as many of the Lube King’s stars were on the IR mending early season ailments.

After a strong first few shifts, the game settled down into a solid back and forth pace. Late in the second period however, the home side was unable to kill off a 4 minute penalty, and found themselves down 4-3 to the Desperados. Cue the comeback.

Determined to make a difference, the dynamic duo of Robin & Marcoux leapt onto the ice. And just like that Dave had 4 assists while feeding Joe several times in helping him pot 5 goals on the night. Not to me forgotten in the fury of offence is Shawn who netted his first hat trick wearing blue and white. In the end, the Lube Kings offensive machine proved to be too much to handle for the Desperados on this night, and as the final buzzer sounded, the score clock had the good guys ahead by 3.

ONE TIMERS
*Shawn now has the title for nicest end to end rush & goal in franchise history.
*Joe now holds the record for most points in one game (7)

Despite a solid third period showing, the Lube Kings came up a few minutes (or a timekeeper) short. It could be surmized that the sportsmanship shown in recent games by spoting our opponents a few goals to start the games should really be avoided in the future. This was made clear once again Thursday night when the home side appeared to be on the verge of taking the lead over the evil Crop Dusters, but ultimately ran short of time and were unable to overcome an early 2 goal deficit en route to their second loss in a row.

After the game a dejected goalie Mich was overheard finalizing plans to jet off for some Hawaiin golf to help him cope with this loss. (Hate that guy)

ONE TIMERS
The organization would like to wish Goalie Mich a great honeymoon golf vacation in the warm (and trembly) surroundings of the Hawaiian Islands. 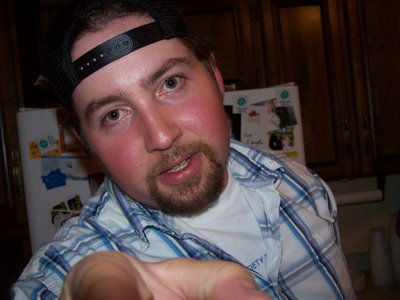 Last night at the Dakota arena the Lube Kings faced off against a familiar foe in team Drunken Haze. Despite a slow start in the first period, the team came together to put up a good fight in the second and third periods. With Goalie Mich pulled late in the third period the home side had the pressure on to tie it up to force OT, but unfortunately a lucky bounce provided the clearing opportunity the Haze needed to pot the open net marker and salt away the win.

ONE TIMERS
The stats and sked should be updated on the website later today.
As usual, let me know if you’re out for these games. 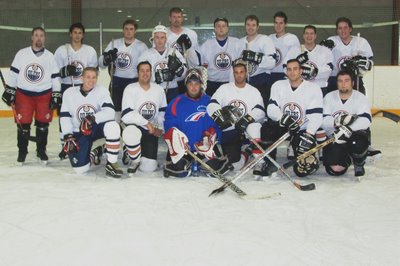 With training camp merely a few weeks away, the Lube kings management is now hard at work planning the roster for its 4th winter league season. We are now in full blown negotiations within the free agent market to ensure another competitive roster for the upcoming campaign.

The pre-season is set to begin in mid-September. Please have your agents call our people to get this thing settled without arbitration. Nobody needs that.