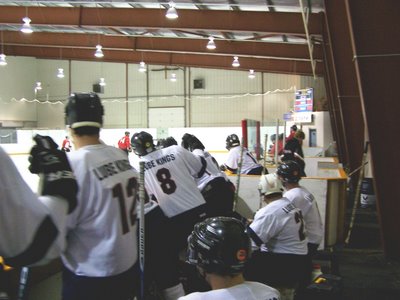 After an extensive free-agent search, the LK Hockey Club is pleased to announce the off season signings of the following players: Todd Valentino, Chris & Ryan Wood, Graham Moorby, Martin Desrochers and the return of Jordan Bissonnette.

This was the largest off season personnel change and we were sad to see the departure of the following characters from the dressing room: Sergio Almeida, Darren Fedyck, Jason Joseph, Rob Driedger, Ryan Jonnesson and Dave Lafantaisie.

This past Sunday the Lube Kings hit the ice for the first regular season contest. The newly formed Ligers (lyh-gurgh)provided a good skate but fell in the end to the home side 5-4. Individual player stats will be updated under the STATS option on the home page.The Lube kings also look forward to regular goalie Mich’s season debut in their next contest this week.

As usual, let me know if you’re a scratch.