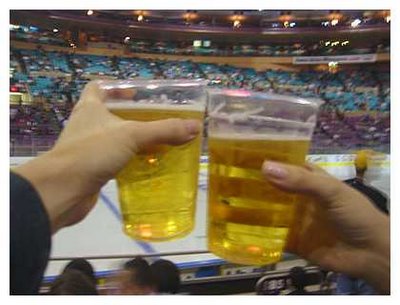 Well this one lived up the the advance billing. In a rematch of last year’s controversial first round playoff matchup, the 3-1 Lube Kings faced off against the rival High Voltage. With an all hands on deck effort, the teams exchanged scoring chances early and often. Goalie Mich was unbeatable in the early going stopping several golden chances for the Voltage.

The game remained scoreless until the 6 minute mark of the second period when the opposition broke the stalemate with a nifty tic-tac-toe play to take the early lead. The Lube Kings responded with a goal of their own a few minutes later and eventually went ahead 3-1 on a powerful shot from the hash marks from Joel “Bazooka” Baetsen.

Fast forward now 2 Voltage goals, the second of which came with only 37 seconds left in the 3rd period. Now with mere seconds on the clock and the score tied at 3 , Dave Robin called a time out and told his line to “Just get me the puck”. Todd was definitely listening, because once the puck dropped, Dave somehow lead a 3 on 1 down the ice towards the Voltage net. Tic toc, tic toc.

He looked for a pass. Saw none. Just like on paper, he shot the puck into their keeper’s mask, stunning him just long enough for the puck to trickle off his shoulder and into the yawning cage behind him, sending the bench into a frenzy!

ONE TIMERS
*Thanks to Serg the ophthalmologist for attempting to remove a guy’s eye 6 seconds into the game and taking a penalty for it…
*The club is offering counselling services to Russ after his own teammate shot him in the tempel and shattered his visor… Bazooka, it’s coming out of your salary.