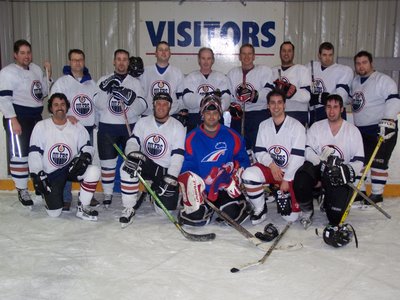 In what should have been the first of several playoff games following an intense regular season campaign , the Lube Kings had a sense of unfinished business as they greeted reporters following a 8-6 loss at the Dakota arena on Saturday night. “Cock sucker!” A dejected Fagundes was heard muttering under his breath while walking down the tunnel after the final whistle had blown.

The entire High Voltage roster clearly came to play Saturday night – ALL of them and then a few; the unofficial superstar count stood at 15 at press time…

The contest itself was an intense affair. Aided by special guest coaches Grant and Findlater the Lube Kings managed one of their best efforts of the season. It was definitely a team effort as 9 different skaters got points during the contest. Unfortunately for the home side the buzzer rang with the score clock showing 8-6 for the visiting High Voltage. Of note on the night were Rick Comeau’s 3 point performance (2g 1a) and Kelly Morris’s patented late arrival prior to contributing a goal and an assist of his own.

The loss capped off the Lube King’s 5th season at the Dakota CC. This year the club finished with a record of 13-14-4 with a total output(including playoff) of 145 goals while allowing 148.

The club is looking forward to icing another team next year, so enjoy the golf season and let’s not have anyone get hurt playing SOCCER or BASKETBALL this summer…