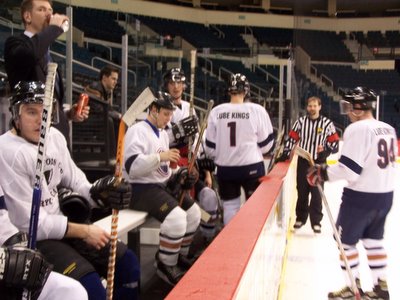 This past Friday night in Winnipeg, the Lube Kings senior men’s hockey club hosted their inaugural Lube Kings and Friends Invitational in downtown’s new MTS Center. Although everyone was clearly giving 100%, F.U.N. was certainly the order of the day.

Coming off arguably one his career best performances the previous night VS The Haze, Goalie Mich stood tall between the pipes once again for the Lube Kings. Afforded the luxury of a bonus 40 minutes of ice time (gratis), Mich was afforded the chance to properly warm up during a Tretiak-esque warm up session. At the other end of the ice, Ray “Shamrock” Sylvestre held court. Well, this guy’s just really good and he knows it, so that’s all the coverage he’ll get…

The actual final score from this contest remains a mystery as both linesmen and the head ref were unable to fill out the official game sheet. Then again, with all the penalties, on ice interviews and incessant berating coming from Coach Will, who could really blame them?

A big thanks goes out to all the participants and fans for keeping things positive and cleaning up the facility after the game. Special mention goes out to Chris Robin and game host Wayne Gretzky for providing behind the interviews and commentary. Who knows, this event might become as synonamous with Christmas as the World Juniors…

The official CD containing over 105 clips and pictures is now available for the low cost of 5$. Let me know if you want a copy.